source:  https://www.radiomuseum.org/images/radio/collins_radio/75s_3b_1117052.jpg This post was triggered by a picture I saw of an S-line on a ham's shelf (not the one above), the top was covered by a cloth and there were papers piled on the cloth.  This covering will become significant later. I developed a negative attitude towards the Collins S-line in college.  It isn't the radios as such although the PTO range always seemed to stop right about where the band got interesting and you had to switch to the next segment and roll the knob all the way back to continue scanning. No the problem was actually the radio club itself.  We had a 75S-3B and 32S-3 with the matching supply.  Very nice rigs, I was especially impressed with the under chassis wiring of the power supply, all laced up and routed just like in the handbook.  But actually the thing that was really impressive about the club station to me was the way the facilities people had drilled through the thick plate glass of
Post a Comment
Read more

Found an Archer branded Radio Shack antenna tuner in a box.  The 1973 catalog describes it this way:  Antenna Tuner.  Matches any antenna impedance between 10 and 1000 ohms.  To 500 watts of RF power.  $9.95 I don't know where the manual is, couldn't find one or a schematic online.  The two knobs control compression caps.  There is a somewhat complicated tri-filar air-core coil resulting in an unusual tuner circuit configuration.  I suppose that unlike most ham antenna tuner circuits, this one could concentrate on one band (CB).  I was hoping to use it on 10 meters to help with receiving but can't get an audible peak. I tried tracing out the circuit schematic: I measured the output winding to the antenna as 0.128 uH.  The  windings are side by side, wire is about 1 mm diameter (#18 ?).  The coil is air-core, about 12 mm in diameter, 6 turns.  The compression caps are marked 200 - I assume that means 200 pF ?  I tried measuring the left cap, got a maximum of 288 pF (tight)
Post a Comment
Read more

I found this file on the web site recently: http://wb9kzy.com/ltc1799.wav It's a recording of an LTC1799 chip the simple example circuit for the LTC1799 chip , here is an article from the vendor on using the LTC1799: https://www.analog.com/media/en/technical-documentation/lt-journal-article/ltmag_v11n1_feb01.pdf Here is the LT1799 product page: https://www.analog.com/en/products/ltc1799.html#product-overview I tried using the chip because I thought it might be useful for a beacon.   I had also seen an announcement from Ocean State Electronics or maybe Philmore that a VFO kit or module would be sold using the chip.  As can be heard from the audio sample, the RC oscillator has an unpleasant warble to it.  Probably not a good choice for a VFO.  The LTC1799 output frequency also drifted higher as time went on (positive temperature correlation).  But it was a really simple circuit. Here is data in a text file from a 60 minute drift test run on the LTC1799: http://wb9kzy.com/ltc1799b.dat
Post a Comment
Read more 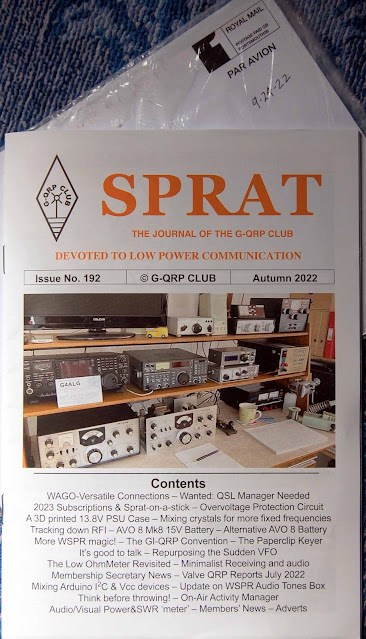 I received my Autumn 2022 issue of SPRAT (Small Powered Radio Amateur Transmissions), the 192nd issue of the official journal of the GQRP Club on Saturday.   Unlike the IEEE mentioned yesterday I've been an on and off member of the GQRP club for well over a decade.  The complete info on SPRAT and the club can be found here: https://www.gqrp.com Membership is on a calendar year basis, the club will accept payment for the 2023 calendar year starting on October 31, 2022.  The dues are 15 Pounds per year, which is an increase but due to the changes in the exchange rate the actual payment in US Dollars is lower than for 2022.  The Club doesn't accept payment for more than 1 year at a time. The club has parts for sale and also back PDF issues of SPRAT on a USB stick. SPRAT itself comes out 4 times a year in the familiar plastic bag.  It's a small format magazine similar to the original sizes of QST, CQ, Ham Radio or 73 Magazine.  But each issue is usually packed with useful circ
Post a Comment
Read more

September 25, 2022
In a way the IEEE is a little like the ARRL.  The Institute of Electrical and Electronics Engineers was formed in the 1960s from the merger of the IRE (International Radio Engineers) and the AIEE (American Institute of Electrical Engineers). https://en.wikipedia.org/wiki/Institute_of_Electrical_and_Electronics_Engineers The organizations are alike in that they are member supported, publish magazines and books, are technically inclined.  But the IEEE is for engineers working in industry while the ARRL is an advocacy group for hobbyists. I've never joined the IEEE.  Maybe like some hams who've never joined the ARRL ?  I just never saw the value in joining.  I read the magazine (Spectrum) in college and could look at the various transactions papers but even the student membership pricing was high.  When I graduated the membership price went up and it was even less of a deal for me.  Also engineers at the time could get tons of free trade publications (which have either gone online
Post a Comment
Read more

Tom Corbett: Stand by for Mars!

I finished reading the first of the Tom Corbett novels: Stand by for Mars https://tomswiftfanfiction.thehudsons.com/TS-Yahoo/TomCorbettBooks/Tom%20Corbett%2001.pdf  Previously mentioned the source for the novels in this blog post: https://wb9kzy.blogspot.com/2022/07/rick-brant-and-tom-corbett-books.html The book contains the origin story for the crew of the Polaris, a rocket ship of the Solar Guard.  The action takes place some time in a future where  Mars and Venus have been colonized.  Roger Manning functions as the troublemaker, radar-man but with a heart of gold and a troubled past.  Astro is an outsized Venusian with a innate ability for rocket mechanics.  Tom Corbett is the born leader of the crew of cadets.  The crew is quartered together at the Space Academy on Earth.  They have a lot of difficulties but eventually bond together during a death defying adventure on Mars. It's a good book, not quite up to Space Cadet by Robert Heinlein but it functions well as a sorta sequel
Post a Comment
Read more

As I kid we heard about the submarines built during World War II in Manitowoc.  And my class went on a field trip to tour the USS Cobia (which must have been docked in Milwaukee).  Interestingly the USS Cobia wasn't built in Wisconsin but the ones from Manitowoc were similar.  Here is a snapshot of the USS Cobia docked in Milwaukee: source: http://www.submarinesailor.com/Boats/Reserve/Cobia245-1960.jpg Here is a page with more info on the USS Cobia in Manitowoc: https://www.wisconsinmaritime.org/submarines/ But I never knew that any shipbuilding was done in Milwaukee.  Then I saw this photo from the Milwaukee Country Historical Society on face: The USS Sandusky hitting the water in Milwaukee A history page on the USS Sandusky: https://www.history.uscg.mil/Browse-by-Topic/Assets/Water/All/Article/2553258/uss-sandusky-pf-54/ The USS Sandusky was built by Froemming Brothers: https://en.wikipedia.org/wiki/Froemming_Brothers Froemming Brothers had their shop on the Kinnickinnic River,
Post a Comment
Read more
More posts